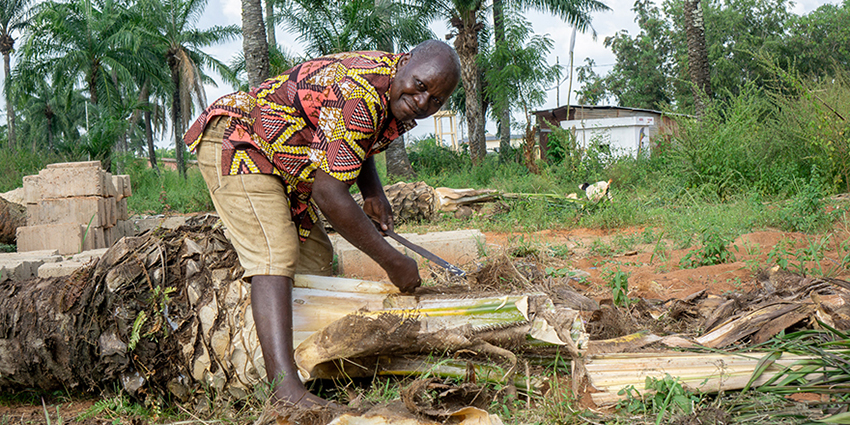 In Benin, more than half of the population lives in rural areas, far from the cities where most traditional banking services are concentrated.

For many Beninese, it is both difficult to save and to take out a loan. Due to a lack of income and sufficient guarantees, rural people, but also women and young workers, are often deprived of the means of financing that could help them to start an activity and contribute to Benin’s economy. To compensate for the exclusion of these populations, microfinance institutions such as RENACA or ACFB have been set up throughout the country.

The Grameen Crédit Agricole Foundation, an actor committed to inclusive finance in rural areas, supports RENACA and ACFB in their mission to promote financial inclusion and entrepreneurship in Benin. Through its financial and technical support, the Foundation helps “to restore hope to communities and to bring people out of a situation of vulnerability,” explains Dieudonné Nganvo, director of RENACA. By offering savings, credit or insurance products adapted to disadvantaged populations, microfinance institutions offer an alternative to traditional banks and promote more inclusive and sustainable finance.

RENACA and ACFB, partners involved in the field

Created in 2008, the Réseau national des caisses villageoises et de crédit autogéré (RENACA) is one of Benin’s most active microfinance institutions. Since 2012, the Foundation has been supporting this mutualist network, which has nearly 145,000 member clients, 60% of whom are women. Present in 6 of the country’s 12 regions, RENACA offers its clients individual and group loans and non-financial services such as personal and professional financial management training. RENACA’s social performance is an indicator of success, as is its financial performance. The institution attaches great importance to its customer relations and regularly monitors its contractors to ensure that they gradually and permanently emerge from economic uncertainty.

The Association des caisses de financement à la base (ACFB) was created by a research and action NGO for the promotion of development agriculture, which initially subsidized women to help them start an economic activity. In order to perpetuate its impact, the NGO preferred the microfinance solution to that of subsidies and gave way to the ACFB in 2004, which is now present in 44 of the country’s 117 municipalities. Since 2016, the Foundation has been supporting ACFB in its missions to promote women’s entrepreneurship and the economic inclusion of the territories.

Based on the model of the Grameen Bank of the Nobel Peace Prize winner, Muhammad Yunus, ACFB specializes in group credit. The latter allows people without individual guarantees to borrow since in exchange the group must undertake to repay if one of the members is unable to do so. The mechanism therefore derives its effectiveness from the bonds of trust and solidarity that exist between members and that encourage repayment: ACFB now has a reimbursement rate of around 100%.

Relationships of trust and proximity with customers, encouraged by the establishment of numerous counters throughout the territory, are also at the root of the success of ACFB and RENACA, which together have helped several hundred thousand Beninese people to secure a better future. With the support of the Grameen Crédit Agricole Foundation, the two microfinance institutions have enabled the development of many sustainable economic activities in sectors such as agriculture, access to water, renewable energies, crafts and education in rural areas. 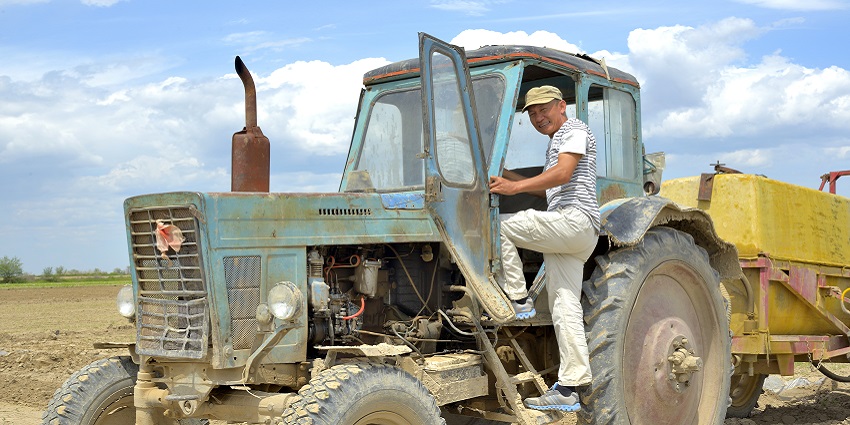 “Solidarity Banker” is a new type of volunteering mission abroad proposed to the staff on behalf of microfinance institutions and social business companies that are partners of the Grameen Crédit Agricole Foundations. Two missions are to be filled: one on “Agricultural loans” in Kazakhstan and a “Business model” mission in Haiti.

Missions to be filled

The first mission to be carried out in 2019 will be for KMF in Kazakhstan. KMF is the primary microfinance institution in Kazakhstan with more than 220 000 active borrowers and a portfolio of over €250 million. The institution wishes to develop its offer of products and services by diversifying its agricultural loan portfolio.

The Solidarity Banker’s mission will be to propose a diversification model for the current loan portfolio of KMF by introducing a new product. S/he will also provide tools for reducing specific risks to agricultural loans. The mission is planned for the first quarter of 2019.

The second mission will provide advice and guidance to Palmis Enèji, a social business in which the Foundation has a shareholding interest in Haiti. Created in 2013 as a programme of the French NGO Entrepreneurs du Monde, it provides effective, specific and economic cooking and lighting solutions for Haitian households. It has developed a distribution network consisting of 150 active resellers in 5 regions of the country who sell lamps and solar kits, improved coal stoves and gas stoves.

The Solidarity Banker’s mission will be to advise and guide the company in defining a 5-year business plan based on its current position, its market and opportunities. S/he will also make recommendations on raising funds to support the growth presented in the business plan. The date of the mission will be set according to the availability of the person selected.

There are several missions pending for CA Solidaires. To discover them:

€200 million granted, a presence in 38 countries, 100 partners supported and more than 350 participants during the Grameen Crédit Agricole Foundation Week. Thank you for celebrating with us 10 years of action for inclusive finance and social entrepreneurship.

We have shared unforgettable moments marking the beginning of a new era for the Foundation. The Foundation will face new challenges and will continue to adapt and to innovate by diversifying its expertise, boosting its modes of intervention and developing partnerships.

The 10 years of the Foundation sign a beautiful collective project, but the fight against poverty continues. This new page of the Foundation’s history, more ambitious, more committed and more cooperative has just started and we are happy to write it with you.

Experience the highlights of The The Foundation’s Week : 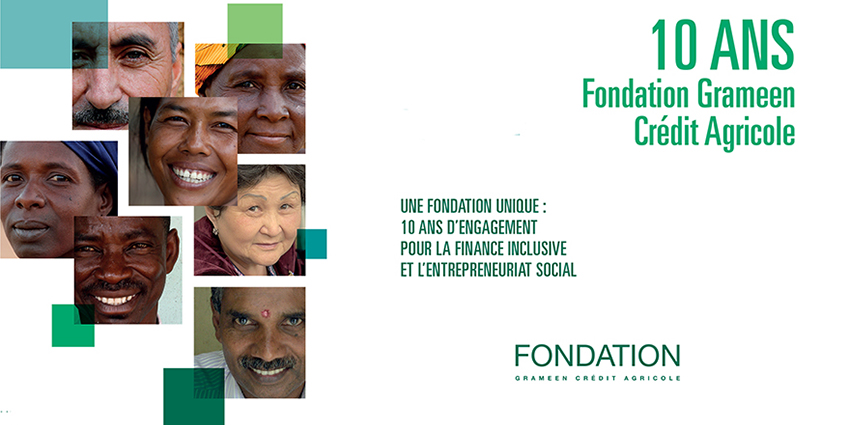 Ten years ago, the Foundation was founded by Crédit Agricole and Professor Yunus, the precursor of microfinance and Nobel Peace Prize laureate. Ten years ago, alongside actors who work every day on the ground, we committed to contribute to build a better-shared economy. The Foundaiton’s anniversary reminds us with enthusiasm of the drivers behind our commitment: not to fear any challenge, not to neglect any territory and never to abandon anyone along the way.

This is why we wish to share with you with this 10th Anniversary Book. It draws lessons from the Foundation’s solid experience financing the microfinance sector. It provides ideas, recommendations and insight on how the banking sector can take action in favour of development and more inclusive, responsible and sustainable finance. 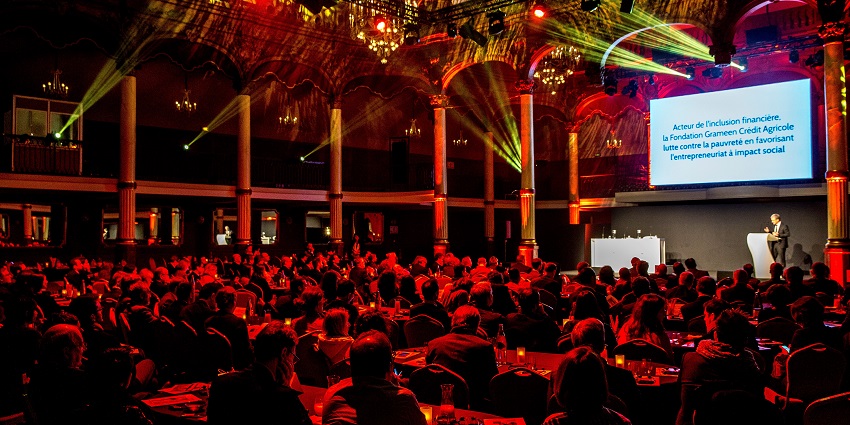 A festive evening to mark the 10th anniversary of the Foundation

The issue of women’s financial inclusion, a priority for the Foundation since its inception, was the topic of the first panel discussion. Soukeyna Bâ, former Minister of Senegal and Board member of the Foundation, Nejira Nalic, CEO of Mi Bospo, a microfinance institution supported by the Foundation in Bosnia, and Bagoré Bathily, Founder of Laiterie du Berger, a Senegalese social company of which the Foundation is a shareholder, discussed the importance of women empowerment as a lever for development. In her speech, HRH the Grand Duchess of Luxembourg also underlined the leading role of women in the microfinance and entrepreneurship sector, hoping for a more active participation of all financial actors in the fight against poverty.
The overview of the Foundation’s 10 years of activity was at the centre of the second panel discussion, which brought together Pr. Muhammad Yunus, 2006 Nobel Peace Prize laureate, Raphaël Appert, CEO of Crédit Agricole Center-Est and First Vice-CHairman of the National Federation of Credit Agricole, and Philippe Brassac, CEO of Crédit Agricole S.A. The founders of the Foundation reaffirmed their commitment to leverage the impact of the Foundation and better meet the new challenges of the fight against poverty. Jean-Michel Severino’s remarks then focused on development issues in Africa and the prospects of the inclusive finance sector in this plural continent.

Digital transformation, ecological transition and structuring of agricultural sectors will be at the heart of the Foundation’s actions over the next four years. With a target of €160 million of funding by 2022, the Foundation will continue to adapt by strengthening its expertise, expanding its fields of intervention and working in partnership. This is the message addressed by Jean-Marie Sander in his closing speech which was followed by a show of the Phare circus, a social company in Cambodia of which the Foundation is a shareholder.
The 10 years of the Foundation represent a magnificent project carried collectively. A new chapter has just begun in the history of the Foundation, collective, ambitious and committed.