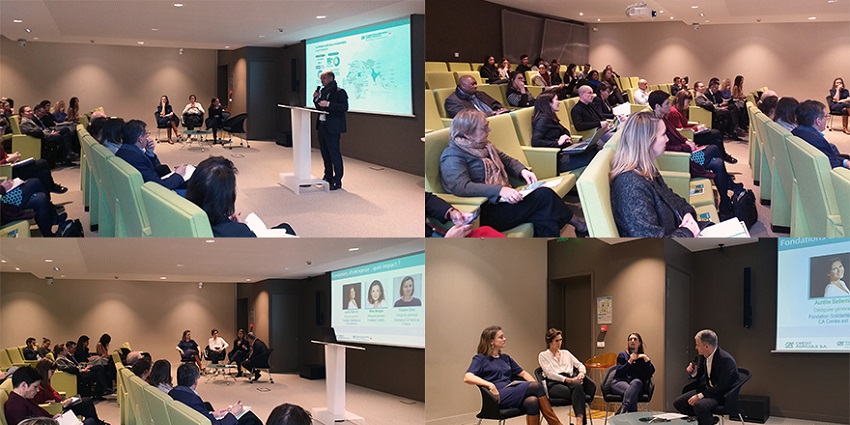 As part of the Grameen Credit Agricole Foundation’s Friends Club meetings, the Evergreen Campus of Crédit Agricole SA in Montrouge welcomed on November 28th, three female managers of Corporate Foundations who came to present their trajectories but also and above all the commitments and impact of the Foundations they lead. 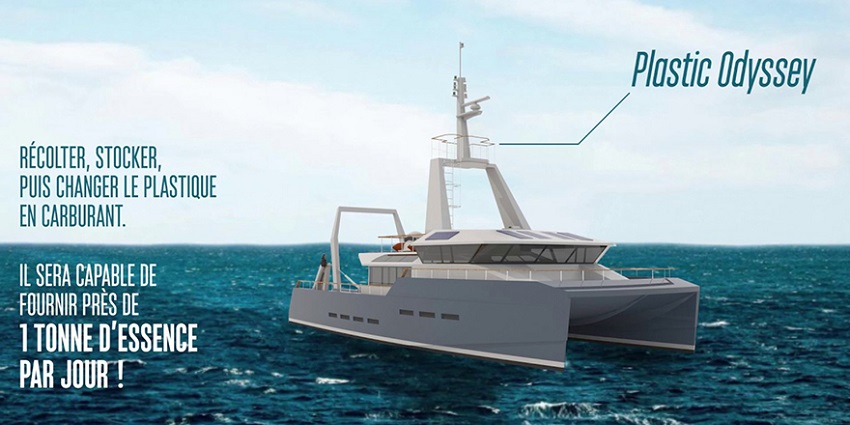 19 tons of plastic enter the ocean every minute. Yet this waste can be an invaluable resource! Make recycling this waste a profitable and job-generating activity: this is the bet of the Plastic Odyssey team. Merchant navy officers, sales manager and engineer, these young entrepreneurs decided to build an ambitious project to raise awareness of recycling plastic waste and share know-how for emerging countries.

For 3 years, the Plastic Odyssey team will sail the seas of the world on a ship to fight against plastic pollution. The expedition will stop in emerging countries to encourage local waste reduction initiatives and the creation of small recycling plants. At each stopover, Plastic Odyssey will share low-tech and open-source recycling technologies to promote the development of micro-entrepreneurship and the circular economy. Training in sorting and recycling plastics will also be offered.

This project does not aim to collect the plastic present in the oceans but to act upstream, by working with the local populations on depolluting solutions, so that the terrestrial waste does not end up in the oceans.

The first ship that advances thanks to recycled plastic

The ship will be ready to go in the second half of 2020. Measuring 40 meters in length, it will operate using fuel made from plastic waste thanks to a pyrolysis plant installed at the rear of the boat: a great first in the field of navigation.

For 3 years, he will successively travel the coasts of Africa, Latin America, and Asia to raise awareness of plastic pollution in the oceans,  encourage the reduction of plastic and its recycling and transform plastic waste into resources.

The fight against plastic pollution: a major social issue

The fight against plastic pollution is a concern that Crédit Agricole shares with Plastic Odyssey. The Group was already a partner of Plastic Odyssey in 2018, during the prototyping phase of the project. Crédit Agricole, via 16 entities (1), is continuing this commitment by supporting Plastic Odyssey’s approach with € 1.2 million over 5 years. The support provided for this expedition is in line with the Societal Project of the Crédit Agricole Group. 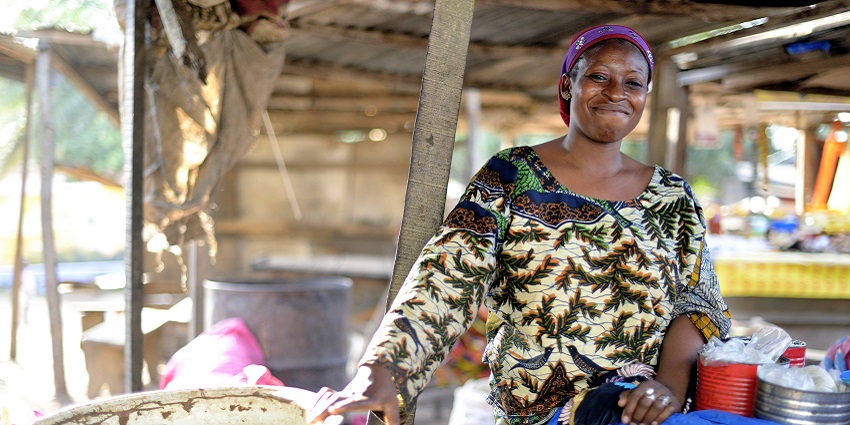 The programme targets rural and peri-urban areas with very high unemployment. The neediest people within these communities are identified by using a household index, an asset test, and a basic interview. Women who may be interested in starting their own microenterprises are invited to learn about Phakamani’s programme. To date, the institution has over 31,000 female clients all located in rural areas and manages a portfolio of nearly € 3 million.

A second investment in South Africa is being finalised in favour of SEF, a microfinance institution that serves 197,359 active borrowers (99% of women). 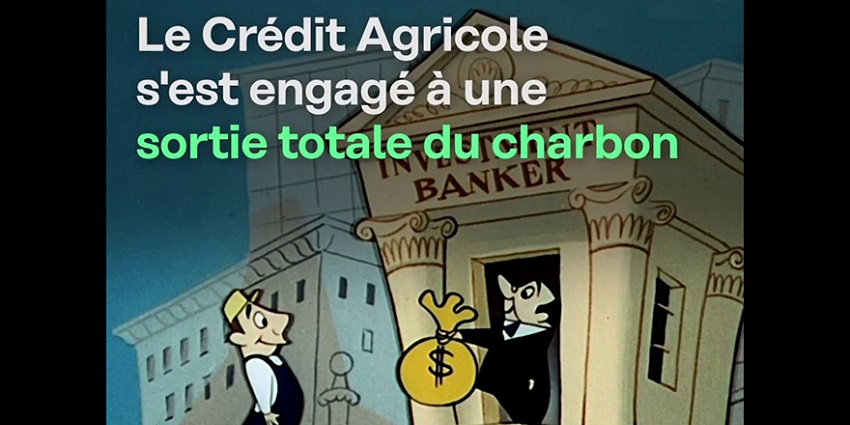 To strengthen its action and commitment to the energy transition, Crédit Agricole has adopted a Group climate strategy, aligned with the Paris Agreement, which will be rolled out by all of its entities. Through this strategy, the Group aims to make green finance one of its levers for growth. In this context, Crédit Agricole is the first major bank to make the exit of coal a climatic imperative.

The exposure of the Group’s portfolios to coal industry will be in line with a full-fledged coal phase-out by: 2030 for EU and OECD countries; 2040 for China; 2050 for the rest of the world. 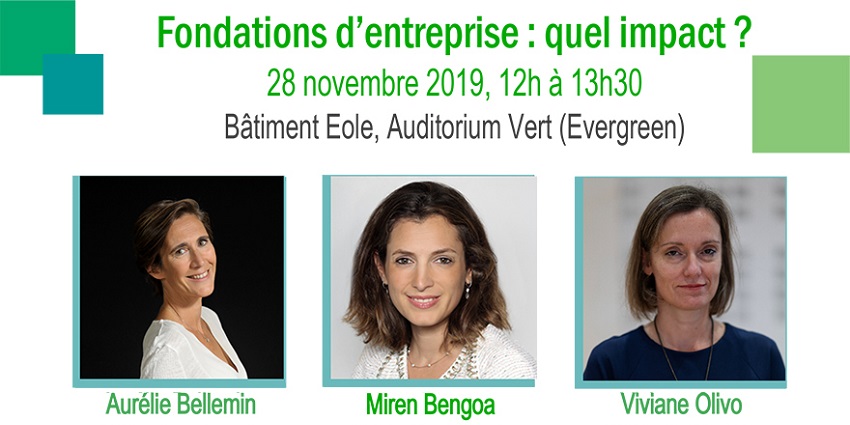 To mark the end of the year, a meeting is organised on November 28th at the Crédit Agricole Campus in Montrouge. Come chat with the General Delegates of three Corporate Foundations that will discuss the action and impact of Foundations, which bring innovation to the company and society.

The event is exclusively reserved for employees of the Crédit Agricole Group. To register, please contact carolina.herrera@credit-agricole-sa.fr 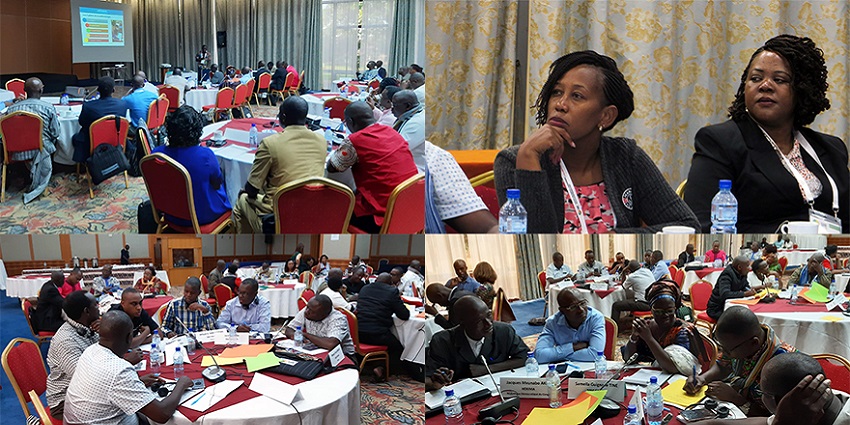 From 20 to 25 October, the Grameen Crédit Agricole Foundation brought together in Ouagadougou (Burkina Faso), 22 African microfinance institutions (MFIs), partners supported within the framework of the African Facility, a scheme set up in 2013 by the Grameen Credit Agricole Foundation and the French Development Agency (AFD) to support a larger number of rural MFIs in sub-Saharan Africa.

Participation in the African Microfinance Week

The African Facility partners also had the opportunity to participate in ADA’s African Microfinance Week (SAM 2019) from October 21st to 25th. Open to all microfinance practitioners, SAM is a common African platform for reflection and exchange among all stakeholders in the sector to accelerate in a sustainable manner both financial inclusion and economic growth of the continent.

This event aims to facilitate exchanges between microfinance professionals and foster synergies at regional and international level. With this in mind, the Foundation organized a training course on Adaptation of MFIs to climate change that brought together more than fifty professionals, mainly from Africa, concerned by the fact that the variations and the difficulty in predicting the climate put at risk the livelihoods of microfinance borrowers, and thereby threaten the future ability of MFIs to operate in rural areas.

Represented by Philippe Guichandut, Director of Inclusive Finance Development, the Foundation also spoke at a round table on the state of the art of the inclusive finance sector and its contributions to the SDGs in Africa. He stressed, among other things, the challenges linked to the financial inclusion of refugees, the challenges of digital finance as well as the importance of financing small farms which remain at the heart of the Foundation’s concerns. 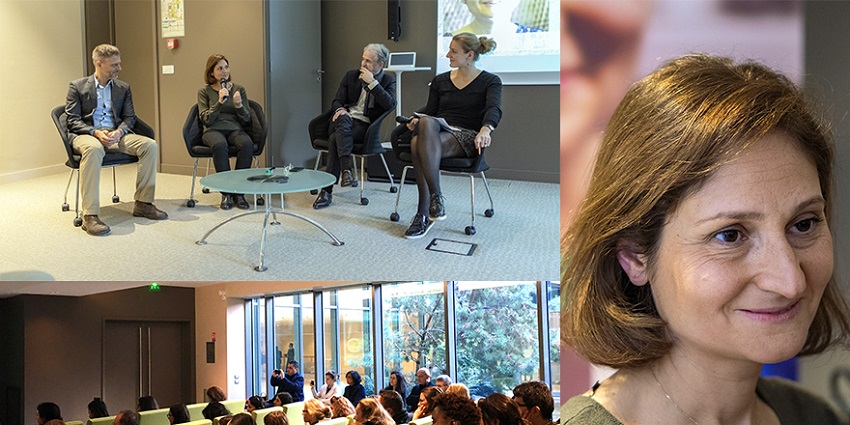 Launched by the Grameen Crédit Agricole Foundation, Crédit Agricole SA and CA Center-est, Centimes solidaires aims to finance entrepreneurship projects by mobilizing employees. On November 4, Rania, an entrepreneur and Syrian refugee supported by the operation, shared her experience during a launch event on the Montrouge Campus.

To launch the 2019 edition of the campaign, Crédit Agricole welcomed on November 4, on the Montrouge Campus, Rania, entrepreneur and Syrian refugee financially supported thanks to the 2018 campaign. After leaving Syria and thanks to the ICI Project (Incubation, Creation, Inclusion) of Entrepreneurs du Monde funded through Solidarity Cents, Rania launched her catering service to share the traditional dishes of her country.

Launched in 2018, Solidarity Cents aims to finance entrepreneurship projects by mobilising Crédit Agricole employees who are invited to donate 50 cents when paying for their meals in collective restaurants.

Thanks to the support of Crédit Agricole employees, € 7,000 were donated to Entrepreneurs du Monde in 2018 to finance the ICI Project which supports entrepreneurship projects for refugees, single parents and homeless people in Lyon. A total of 20 training courses were organised, which allowed the programme team to train 18 people in the entrepreneurship field.

Watch the video of the operation which presents Rania’s journey and the testimonies of the staff who participated in the operation.